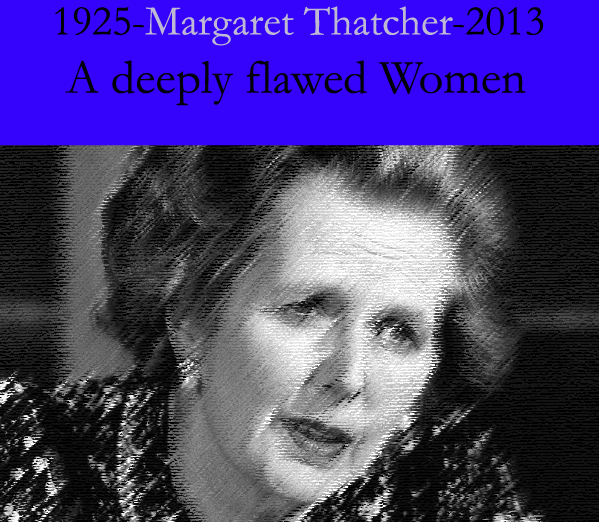 I don’t normally criticise the dead and this post is much toned down than it started out,never the less too many people in powerful places are trying to AIR BRUSH Margaret Thatcher’s leadership into something it will never be…..Great.

She was not a great and astute thinker because her track record is littered with examples such as calling Nelson Mandela a terrorist or supporting General Pinochet the Chilean Fascist Dictator.

Or supporting the Khmer Rouge and Pol Pot even though this despotic regime went on to murder  1 million of its own people.  Or perhaps her supporters would call her astute for removing the Naval vessel that guarded the Falklands prior to the invasion to save money?

Even in death she has split a nation and reminded us how wide the gulf has become between the Haves and the Have not’s.    And before someone accuses me of jealousy…. I mean Those that  “Have” a moral conscience and those that “Have” not!!

How come the Queen of Privatisation couldn’t arrange free enterprise to pay for her funeral?

After all, surely a private company could do it more efficiently? Not to mention more cost effective.

Worse than the wasting of £10 million pounds of public money and the unnecessary recalling of parliament is the continuing Airbrushing of history.  Making Mrs Thatcher out to be some kind of moral hero of Great Britain when she was anything but…..

The Tories often tout how wonderful companies become after being privatised, but under closer scrutiny are they?

School Dinners - She helped give birth to the Turkey Twizzler by her education act 1980 which made it possible to sell off school dinner contracts and remove a law protecting the nutritional value of school dinners that dated back to 1905. This brought about the sell-off of catering contracts, the firing of many dinner ladies to lower costs, the use of more, junk ingredients, the introduction of vending machines and the junk food sold from them and was one of the tenets along with the advent fast food restaurants and the invention of the "kiddie menu" which help fuel the obesity crisis in the UK we are still fighting today.

British Coal – Destroyed an industry in areas of the UK without offering any alternative for thousands of workers.

Railways- Many of these national assets were sold off cheaply particularly the railways.  And now the UK rail network is back to its dislocated state it suffered during the Second World War.  So if you want to make a journey from say Kidderminster to Bodmin Parkway in Cornwall it involves a lot of changes and waiting. But are rail fares any cheaper? Are the trains cleaner and do they now run mostly on time, absolutely not but they are still subsidised by the British taxpayer and the cost of rail travel is the highest in Europe.

North Sea Oil- When she sold off the North Sea oil fields the British public were told it would benefit us all, but I only see the benefit to the shareholders.

Utilities-When she sold off the gas companies, water and electric companies who has benefitted the most shareholders or taxpayers?  In relative terms would your bills have risen this steeply? If there were no Millionaire bosses or mis-selling (and subsequent fines) to pay for?

Banks-Perhaps Mrs Thatcher’s crowning glory was to deregulate the financial industry and set them on the path to their excesses, thievery and mis-selling which put us all in Hock for years!!! The financial crash of 2008 could not have happened without Margaret Thatcher.

Let’s not forget before the bank fiasco her loosening of regulations helped all kinds of mis-selling sprout up in the Insurance industry. Again we the gullible were told lighter regulation would mean cheaper insurance. Even today in 2013 and beyond the mis-selling scandals continue to pay out millions, which of course raises the cost of insurance.

Maggie and the Press

She invited Rupert Murdock to buy up some of the failing British Newspapers and look how that turned out.

During her premiership, Thatcher had the second-lowest average approval rating, at 40 percent, of any post-war Prime Minister. At yet the government is honouring her akin to Winston Churchhill.

Let us not forget

Husband Denis bought the waste disposal company Industrial Waste Service who did business with the American Mafia according to the documentary aired on British Television Channel 4 in July 1989.   http://news.google.com/newspapers?nid=2507&dat=19890704&id=PQ01AAAAIBAJ&sjid=oKULAAAAIBAJ&pg=4471,640808

At the time the story got more coverage in the USA and it is rumoured it took the intervention of President Reagan to save Denis from further embarrassing revelations. Funny how it seems almost impossible to google the details (because they’ve been airbrushed).

In 1998 South African authorities investigated a company owned by Mark Thatcher for allegedly running loan shark operations. According to the Star of Johannesburg', the company had offered unofficial small loans to hundreds of police officers, military personnel and civil servants and then pursued them with debt collectors.   He claimed that officers had defrauded him and charges were dropped.  It was also suggested that he had profited from contracts to supply aviation fuel in various African countries. In 2004 he was arrested in South Africa in connection with the 2004 Equatorial Guinea coup d'état attempt), and pleaded guilty in January 2005 to breaking anti-mercenary legislation.   At the time the Sunday Times suggested that he had personal assets of £60 million, most of which was in offshore accounts.

Following his guilty plea he left South Africa and lived in Monaco for one year on a temporary residency permit; this was not renewed as Sir Mark was said to be on a list of 'undesirables' who would not be allowed further residency and he was required to leave by mid-2006.   His wife and children moved back to the USA, but he was refused an entry visa due to his conviction in South Africa. Do children learn this from loving, normal, decent and moral parents?

The Delusions of later life

Margaret Thatcher awarded herself the hereditary title of Baroness which was extremely unusual. By now deluded by her own power and spoke just like Queen Elizabeth does using the royal “WE”   “we are now a grandmother” as if she was royalty.   But unlike the royal family she had spent a lot of her leadership serving her toff friends rather than the country as a whole.

Ding Dong the Witch Is Dead

Should we denounce the greedy sinners her policies encouraged absolutely YES!!!!

But unfortunately, there is still greed and arrogance aplenty in the leadership of our country.

As for Tony Blair, he should be kicked out of the Labour party for speaking recently kindly about a woman who should have been his nemesis if he wasn’t so much of a Maggie Thatcher Wannabe,

I can't wait until someone suggests Tony should be made up to hereditary Baron Blair on the New Years honours list.

Another article worth reading