The sorry tail of the dress I bought from Debenhams 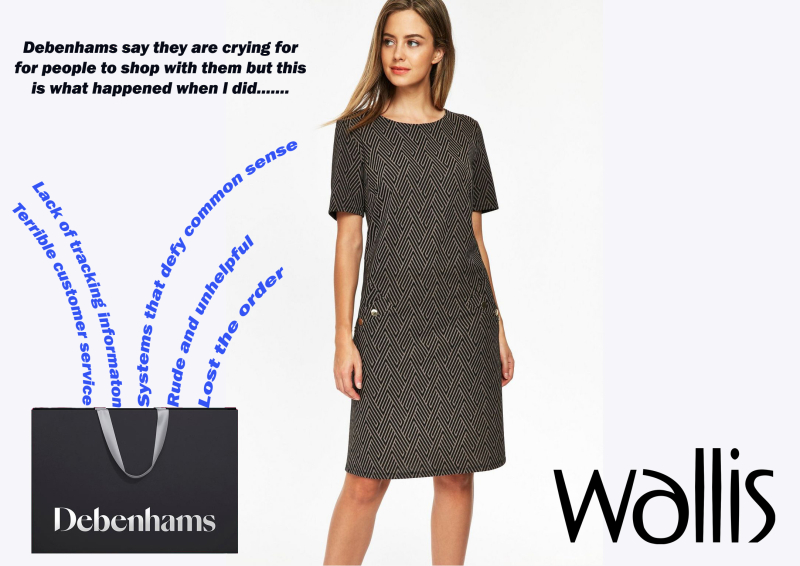 Several weeks ago I wanted to buy my wife a dress, something classy since she had an important work appointment coming up.

I found this particular Wallis camel textured shift dress you see in the photo in her size petite size 10, she liked it so I ordered it on December 5th.

On December 6th (according to Debenhams own site) it was dispatched and then the Odyessy began..........

Unlike when I have bought Debenhams own items this Wallis dress could not be delivered to my local Debenhams store, why I still don't know?

After several days the so-called tracking information had not changed, so I began to wonder if there was a problem?

So my wife called the customer service number (which can take a while to get through) and was reassured that the dress had been dispatched from Wallis and would be delivered by Tuesday 11th December by the latest. Well, of course, you guessed it no dress on Tuesday, so whilst I fixed dinner Sophie called to try and find out why her dress had not come?  She was told sorry with no explanation as to what had happened to the dress I had paid for. The customer service person said they would send an "urgent email" to Wallis to find out where the dress was? Hearing this in the background (as I prepared dinner) I asked why it wasn't possible to phone Wallis rather send them an "urgent email"? I was told this is the system they have to follow.  The Debenhams customer service person continued.....Wallis should reply to the urgent email within 72 hours.  This customer service person also said they would call my wife (since they had her mobile number) as soon as they had heard from Wallis.

It was at that point I knew I would have to do battle and shame Debenhams into pulling their finger out and find the dress I bought for my wife.

I can buy all kinds of items on Amazon UK and have them delivered the next day complete with tracking information but Debenhams couldn't even give me a tracking update after 7 days!  In recent times it's been reported that Debenhams is in financial trouble and their spokespeople say they want customers, but the management doesn't seem to know how to set up customer services and use common sense decisions about communication.

I reached out using my social media accounts on Twitter, Facebook, Instagram and LinkedIn to try to find someone who worked for Debenhams who actually cared for the customers, someone who would not just quote platitudes and tell me that's the way it is.

I started writing this story last December, and in the end, I got a refund but I was left feeling very reluctant to shop online at Debenhams or Wallis again.

The UK high street is shrinking fast because of Amazon and other online retailers, but the remaining department stores need to be run better and improve their customer service if they want to stay in the game.  In April 2019 Debenhams went into administration and is in the process of trying to trim down its number of stores to stay in business. By mid-May 2019, Mike Ashley began to mount a legal challenge to the rescue package because he lost £200 million when his shares were wiped out when the company fell into the hands of its lenders.

Ashley's company (Sports Direct) offered to inject an addition £200 million but his offer was rejected mainly because it was conditional on Ashley becoming chief executive of the department store chain. So thousands of jobs and pensions put at risk as these powerful men put egos before the good of the company's long term survival.

The future of the UK's 241-year-old Debenhams still hangs in the balance.  It is such a shame that the for years British high street stores have been run by numpties and bone heads, who seem to have totally lost touch with the concept of customer service and speedy service.