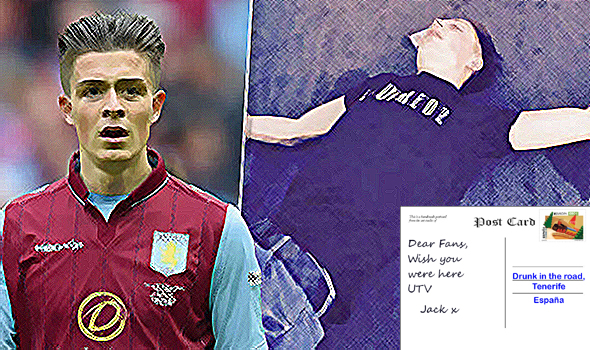 "Overpriced, overpaid with egos as fragile as an eggshell!" Are the typical comments you hear more and more about today's footballers. Why is it when a football team does badly repeatedly, the manager is the one who loses his job?

Back in the real world.........when most people perform consistently badly in their job, they are the ones who get fired.

For my own sins, I've been a lifelong Aston Villa fan supporting my team through thick and thin since the early 1970's.   Early on in this love affair the team dropped into the old Third Division (now called Division 1), and eventually climbed two divisions back to the top.  But in the last 25 years, as the player's wages have soared they seemed to have totally lost touch with the sacrifices ordinary people make to support their team.

Supporters are no longer willing to keep paying ever higher prices to watch their team play without passion or effort.  For some reason, players simply don't see the correlation between their rising wages and the raised expectations of fans, nor the shrinking patience when players seemingly don't give maximum effort.

Aston Villa Football club are a prime example of what is wrong, desperately wrong, with the modern game.  For all the millions that have been spent by the past owner and now the current one, it is still down to the efforts, skills, fitness and commitment of the eleven players on the pitch.  Back in the seventies when Villa was down in Division 1 (for two seasons) the team often played in front of 30,000 plus crowds because they were exciting to watch and never gave up.  The old wooden stands made a thunderous sound with stamping feet and equally, the cheering, chanting and applause matched the heroic effort of the team.  Walking back to the bus stop with a hoarse throat as we reminisced the highlights of the game.

For all the money sloshing around in the game, why are so many top prospects not instructed how to behave on the pitch, in public and to appreciate the special position in society they are given?   Instead, like a bad joke stuck in a repeating loop the acts of stupidity, greed, lack of self-control, poor choice of friends are constantly played out in public.  Where are the Academies in all of this? Where are the football authorities clamping down on disrepute brought to a game we gave the world?

Is it beyond the wit of man to teach these kids that the price of fame and success is to learn self-control, not just for the benefit of the clubs but to help prolong their short careers. In recent years my own team has suffered from more than its share of players never reaching their potential, often running out of chances and career before they grow up.

Touted by many in the game to have tremendous talent, Jack Grealish has shown flashes of that talent for both Aston Villa and recently for the England under 21's. But even more memorable is his loutish, out of control, laddish behaviour.  This lack of self-control has already gotten young Mr Grealish into trouble both on and off  the field; but so far no amount of telling off's, fines, or being made to train with the reserves has managed to change this young man's ways.  For the moment, his repetitive bad behaviour is forgiven as long as he still shows such exciting potential. So will he reach that potential, or continue to be an accident waiting to happen? Jack joined Aston Villa at the age of six, so why hasn't anyone at the club taught him that part of being a professional footballer is good behaviour? 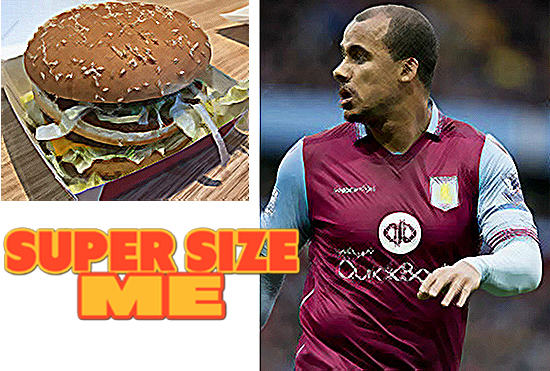 But Jack Grealish is not on his own when it comes to badly behaved current Villa players. It was local gossip that Gabby Agbonlahor's car could always be seen in the car park at MacDonald's, no wonder he has constantly battled with weight problems. And when he is not scoffing burgers down, he is getting another woman pregnant!

Another product of Aston Villa's Acadamy, Gabby was touted as a future legend but instead of working hard, improving and flourishing after getting the call up from England, he has frittered his talent away. Now when he should be in his prime at the age of 29 he is in danger of being released. And just like many other footballers in the modern era, he is in denial about who is responsible.

This current plague is not just a problem for Villa's homegrown talent, sometimes buying a "star player" can bring the same results 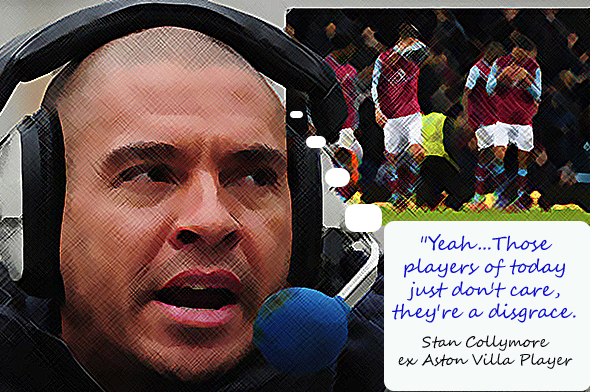 Ex-Villa Player Stanley Collymore who now hosts a popular football call-in program has several times torn into the current Villa team (this year's and last) for their lack of effort and lack of loyalty to the club.  All of the accusations Stan makes are valid ones, but Stan has a short memory because his own career at Aston Villa was filled with his: lack of effort, egotistical behaviour, and only 7 goals in 47 games as a striker!

He too showed stunning potential earlier in his career by scoring 41 goals in 65 games for Nottingham Forest , which got him a transfer to the big time with Liverpool.  But after several mediocre, seasons they sold him to Villa.  This should have been his dream move after all Villa were the team he supported as a boy, but he has never worked hard enough to get past his demons to become the legend he had the potential to be.

The success of the Premier League and all the money pumped into the game by Sky has glossed over these problems but they are not going away.   TV Pundits, Sky executives and the media all seem to forget where most of the money for the mega TV contracts comes from....us.   Not just Sky Sports subscribers, but all Sky subscribers (because they spread their cost), and now, of course, BT subscribers too.  Millions of ordinary people, with ordinary wages paying to keep this narcissistic bunch of wastrels in the style they have become accustomed to. The problem of bad boy footballers was around long before the formation of the Premier League and Sky TV, but the huge injection of cash into the game has definitely exacerbated and fuelled it.  It used to be that established, successful footballers would from time to time behave badly, but now the situation has moved on to where the starlets of the game are misbehaving before their career gets going.

This problem is not just with Aston Villa, other teams have their share of bad boys who constantly bite the hand that feeds them.  Yes, there are many decent, hard working footballers who do respect the privileged position they are in. And since they rub elbows with the bad boys at the training ground I wish they would tell these silly Mommies Boys to grow up.