Hey You Brits--Get off your Arse and Do your Duty!!! 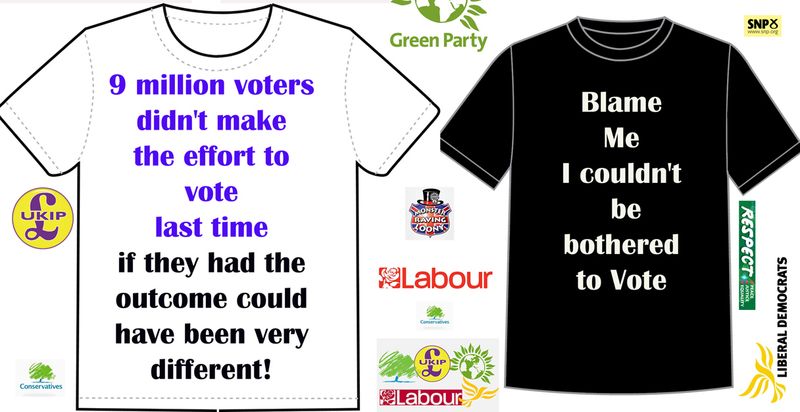 Let me start by saying there is not one politician I would wish to stake my life on, but even so, there are differences, though those differences seem to narrow with time or advice from their media savvy handlers.

Which one of these dunderheads' would you prefer in 10 Downing Street?

If there is anything worse that a lying, dishonest politician who is either corrupt or just inept is a voter who doesn't vote.  And I think it is time we shone a light on this segment of the British population who's lack of civic responsibility and has helped keep these boneheads in a job.  They reckon that in the last General Election 9Million eligible voters didn't Vote.

So 9million voters had it in their hands to change the result drastically but chose instead to stay home at watch TV.

I must say as an Englishman not very familiar with the logo of the SNP, when I see it with its yellow ribbon I think of "snip" and the vasectomy my ex-wife was always trying to talk me into.

I can't help but laugh when I hear their name Con-serve-ative . They don't conserve anything if they can make a profit (sell a forest off here, or national assets off there or declare that fracking will be good for the country....but if we are honest we know, surely to god we know they only serve their own interests. And some would say they definitely live up to the first 3 letters of their name CON.

Well after being the virginal bridesmaid for donkey's years they finally got into bed with one of the heavyweights and it seems to me they got a right old shafting, with not-so-much as a thank you or a tip left on the dressing table.

One thing they do have right is whatever the makeup of the next government we need to stop the flood of low paid eastern European workers. This flood seems to be really pushing our services like health and housing to the limit (at a time the toffs are cutting budgets and services).

This is nothing to do with race but it is to do with the fact we are smaller than Germany or France.  Surely in the future, they too may wish to kerb their influx of EU workers, by which time the UK could be standing room only.  I lived for 2 very happy years on the island of Bermuda, any expat living there for more than 10 years was put into an exit lottery , to try and keep the population down.  No one called them racists for dealing with the facts.

The UK greens are run passionately by an Australian called Natalie Bennett, who had a bit of a brain freeze the other day on live radio.  Strangely enough, it takes an Ozzie woman to fight for the left centre ground once proudly held by Labour.  She espouses many views which are close to my heart like re-nationalise the railways which have become too expensive compared to most other European countries, and yet we the taxpayers are still subsidising.   Or fighting against fracking which seems set only to benefit investors at the expense of climate control. If the unions ever switch their financial support to the Greens this could fundamentally change the political landscape and even mark the beginning of the end for the Labour party.  The question is, does voting for the Greens let in the Tories?

In some respect, George Galloway seems like a very reasonable peace loving man.  But if you are going to name your party Respect then perhaps he should lose the wacky behaviour, wearing spandex onesies and going on reality shows to raise his profile.

There may be young readers who think I made this party up, but no it is an official political party.

Formed in 1983 by the late musician David Sutch (1940–1999), better known as "Screaming Lord Sutch, 3rd Earl of Harrow" .   The party is notable for its deliberately bizarre policies and it effectively exists to satirise British politics but they do fund a few candidates for each election.

Two others were important in the formation of the OMRLP. John Desmond Dougrez-Lewis stood at the Crosby by-election of 1981 (won by the Social Democratic Party's co-founder Shirley Williams). Dougrez-Lewis stood at the by-election as Tarquin Fin-tim-lin-bin-whin-bim-lim-bus-stop-F'tang-F'tang-Olé-Biscuitbarrel, taken from the Election Night Special Monty Python sketch.

The second important pioneer was Commander Bill Boaks, a retired World War II hero who took part in sinking the Bismarck. Boaks had campaigned and stood for election for over thirty years on limited funds, always on the issue of road safety. Boaks proved influential on Sutch's direction as the leading anti-politician: "It's the ones who don't vote you really want because they're the ones who think".

So even if you chose to vote for them...get your butt off the sofa and VOTE, after all, they can't be any worse than the other lot!  Otherwise, somebody will probably pass a law (like Australia has) making it illegal to not vote and even fines their sofa bound citizens.