Rich Tory Toffs Are At It Again! 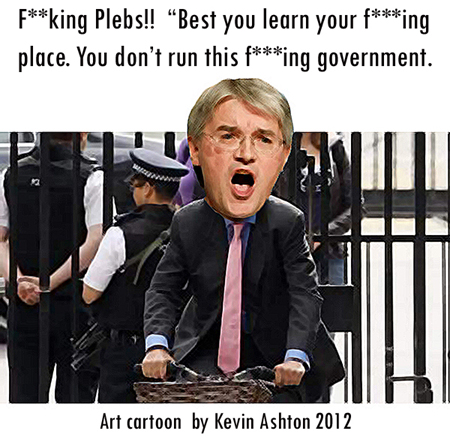 Andrew Mitchell — newly-promoted by PM David Cameron to the cabinet position of Chief Whip lost his temper when the police who protect 10 Downing Street would not open the main gates for him to cycle through. They tried to usher him through a side gate used by all pedestrians.

The Tory lost his rag when police told him security rules mean they open the main gate as little as possible.

It’s reported by several newspapers that the Tory MP— dubbed “Thrasher” when he was a posh prefect at Rugby public school said “You’re f***ing plebs.”

The Police officer targeted by the tirade reported to his superiors that Mitchell told him: “Best you learn your f***ing place. You don’t run this f***ing government.   “You’re f***ing plebs.”

Despite his fury, the officers refused to budge and warned him that he would be arrested under the Public Order Act if he continued to abuse them.

For those not familiar with the word pleb the Urban dictionary says:

Pleb: Actually defined as a member of a despised social class, a commoner, a member of the plebs of ancient Rome. Also low-born, undisinguished, vulgar, and my personal favourite: vulgar-looking.

The Prime Minister condemned Mr Mitchell after the The Sun newspaper revealed the outburst.

The Chief Whip apologised for his behaviour but insisted he did not use the words “plebs”.

However John Tully, Chairman of the Metropolitan Police Federation has backed The Sun’s account after speaking to the abused officer.

Mr Tully reportedly said: “I know what the officer has told me and I know who

He then called for Mr Mitchell to go, saying: “He should resign. As a Cabinet Minister it’s unacceptable for someone of his standing to use such disrespectful and abusive language to a police constable let alone anyone else.

"If the shoe was on the other foot and my officer had said those things he’d be out of a job now. Its double standards.

“Only a few days ago the Government was expressing support for the police in the wake of the officers’ deaths in Manchester, and then we have a very senior member of the Government saying that officers are plebs and morons.

“I know Mr Mitchell has apologised and that’s good, but it’s not enough."

Speaking on a visit to Greater Manchester Police headquarters in the wake of the murders of Pcs Fiona Bone and Nicola Hughes, Prime Minster Cameron said: “What Andrew Mitchell said and what he did was not appropriate. It was wrong and it is right that he has apologised.

“He has obviously apologised to me, but more importantly he has apologised thoroughly to the police and that needed to be done.

“Police do an outstanding job across our country. They do a very important job protecting places like Number 10 Downing Street and I am very conscious of the protection they give to me and my family and the work they do for everyone in public life.

“I am eternally grateful for that and the police should always have our respect and our help and support and that is very, very important.

His disgraceful outburst on Wednesday evening came just 33 HOURS after PCs Bone and Hughes were shot dead in Manchester.

The Police Federation of England and Wales, which represents rank-and-file officers, today slammed Mr Mitchell saying it was “hard to fathom how someone who holds the police in such contempt could be allowed to hold a public office”.

Tourists and other members of the public looking in towards No10 heard the tirade and were left “visibly shocked” by it, the Downing St cop told bosses.

Mr Mitchell has since apologised to the PC who copped the most offensive but he is still denying using the word plebs even though the police officers reported his tirade word for word.

Ironically right-winger and keen cyclist Mr Mitchell is a former shadow police minister which tells you everything about the reality of how the Tories in government view the rest of us.

A former investment banker, he is worth at least £2.2million and owns a number of swanky homes.

He lives in one of the most fashionable squares in Islington, North London, with his GP wife Sharon and their two daughters.

He also has a house in his Sutton Coldfield constituency in Birmingham and a property in the French ski resort of Val d’Isere.

A Met Police spokesman said last night: “We have not made a complaint.”

The murders of PCs Fiona Bone and Nicola Hughes have left Britain’s Thin Blue Line feeling very vulnerable. That is on top of a deep resentment over redundancies and pension cuts.

The knives are out!

From former Tory party volunteers to Mr.Mitchell's neighbors are lining up to tell all

The Daily Telegraph have taken the unprecidented step of publishing the whole of the police log which make it abundantly clear that Mr Mitchell has been telling porkies to the Prime Minister.

And finally I saw this spoof Andrew Mitchell bicycle advert, at least I think it was a spoof? 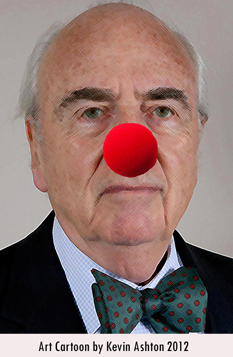 If you need more evidence that the Conservatives are out of touch with ordinary people the Prime Minster’s advisor Lord Young A KEY adviser to David Cameron was slammed last night after he questioned whether Britain was really in recession.

Lord Young said he believed official figures that show the economy is shrinking could be wrong.

The Tory peer said: “I’ve never known a recession where employment goes up and at a time when the population is growing. I’m not sure the Government can actually measure the economy any more.”

Labour accused the 80-year-old of being out of touch. Shadow Treasury minister Chris Leslie said the Government “should be changing course and kick-starting the economy”.

Lord Young’s comments echo remarks he made in 2010 when he said Brits had “never had it so good”. He was forced to quit then as the Government’s enterprise tsar.

Can my readers please send a few get well cards to the poor little lambs at Birmingham Council.

According to my local newspaper Birmingham City Council staff took off 58,635 sick days between April and July of this year.   It is estimated that every additional day on the average rate cost the local taxpayer an extra £3 million to pay for cover or agency staff and delays to services.