Home Archives Profile Subscribe
I could have sworn it was the glorious 12th!
Sir Richard's Smelly Toilets 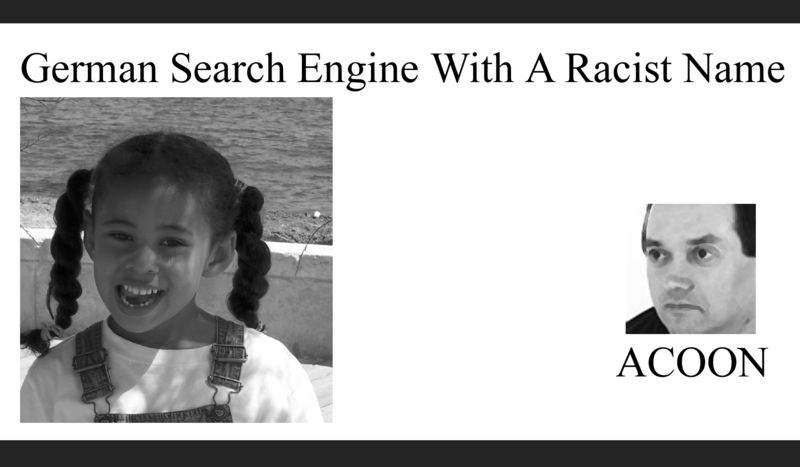 Surfing the internet I chanced upon a site called ACOON, on closer inspection this was actually 2 sites Acoon.de  and Acoon.com both owned by Michael Schöbel in Germany.

Since June I have been in correspondence with Michael trying to convince him to change the name carefully explaining what A Coon means in English.

Coon:  An insulting name for a black person. Similar to ‘Nigger’.

2. Offensive Slang Used as a disparaging term for a Black person.

At first the owner Michael Schöbel showed sympathy to my complaint and said he would rename the site, and that he didn’t realise the racist meaning when he chose ACoon as the name for his search engines.  Then when I followed up with further emails he said he still needed more time to make the necessary changes.

Now in September, Herr Schöbel told me that he has taken down Acoon.com but when pressed has flatly refused to change the name of Acoon.de because he says and I quote,

“Acoon.de is meant for the German-speaking audience. Acoon.com was meant for the rest of the world, but now I know that I need to use a different name for that”.

He reasoned that because 90% of Germans would not know that Acoon is a racist slur it was ok.

I went on to ask him if I could open up a website in Germany and name it Nigger would that be allowed? and he said, “if you would call a German website "nigger" you would definitely be in trouble. Because people here actually know what "nigger" means”, end quote.

Should a search engine continue to use a racist term for its name even after it has been pointed out?  Herr Schöbel has tried to imply that only Germans would see his Racist named search engine but that is just simply not true, the internet is not a series of islands but an interconnected super highway.

It is impossible to corral a racist named search engine just in Germany.   As the world becomes ever more interconnected, Germans will learn the English/American meaning of ACoon and demand it’s change anyway.

If someone types in “worldwide search engine list” the very first result on google page one is a site called http://www.searchenginecolossus.com/

This is a list of search engines and directories across the globe catalogued into countries.

If you click on the list of German search engines you will find this description of Acoon.de

The largest, most powerful German language database on the web! [spinne] (Marl, Nordrhein-Westfalen)

So does racism matter on the internet?  Well it should, I know there are lots of worse things happening in the world such as wars, famine, genocide etc, but just like the beginning of the persecution of the Jews before the Second World War….Wrong is just plain wrong!

If we don’t stand up and prevent this unnecessary racism then where does this lead?...definitely not to a better more tolerant,  inclusive world.  When the persecution of the Jews began in the 1930’s many decent Germans looked away and didn’t speak up.  And still today as the conflicts in Africa and Syria show, denial is still a major factor in facilitating racism and hate crimes.

The bad thing about Michael’s decision is seems to be based around economics rather than the morals of the issue.  Perhaps if a few thousand decent Germans wrote complaints he might rethink the long term economic down side of having a racist name on his search engine.