I could have sworn it was the glorious 12th! 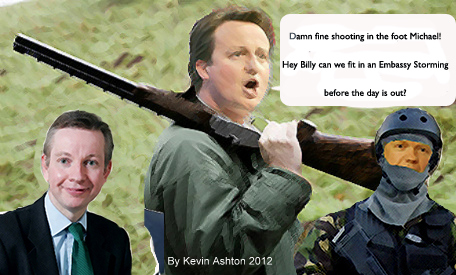 I was watching the news last night about Prince Phillip having to go back into hospital because of a reoccurrence of a bladder infection.   Having had more than my fair share of similar problems, I wish him a speedy recovery.   Just like the Queen he sets a great example for others to follow.  Of course when a member of the royal family get taken to hospital it's headline news and various people are hurriedly invited to add to the story, especially on 24 hour news channels.

One such uppercrust “royal watcher” was asked about the Prince’s health and how only a couple of days ago on August 12th the Prince had been grouse shooting (the 12th August being the beginning of the hunting season for Red grouse in the UK).  The man then went on to add in a very plumy voice “It was every Englishman’s dream to shoot and then eat a grouse on the Glorious 12th!”....which told you everything about this person’s disconnection to the real UK that most of us live in.

Being a Brit and feeling so proud of the efforts of Great Britain's Olympic Athletes in the last couple of weeks, it came a quite a shock to find out from 38 degrees that the Minister for Education Michael Gove, is trying to quietly relax rules on UK school playgrounds so some of them can be sold off!         Talk about Olympic Legacy!!!!!!!!!!!!

Selling off school playing fields to developers originally goes back to the Thatcher Government, and that together with the scrapping of the legal obligation (1980 Education Act) of schools to provide a nutritious meal brought about the Turkey Twizzlers all all the other junk food served up for school dinners. These two decisions were the building blocks for Obese Britain in 2012.   Of course the Labour government that followed did'nt repeal this folly because Tony Blair was too busy trying to show how "Tory like" his party could be so the sale of playing fields continued.  Fast forward to 2012 when 1 in 4 adults in the UK are obese and school playing fields are still being sold off.  True to form the Conservatives try to push through legislation to do more sell off whilst at the same time telling the public the importance of an Olympic legacy.   According to the Gurdian Newspaper Mr Gove ignored advice from an independant panel no fewer than 5 times.Michael Gove ignores independant panel's advice    All UK people please click this link and sign the petition now.
Help stop Michael Gove's sneaky sell off of UK school playgrounds

On a different subject of Julian Assange the man behind Wiki leaks, again the Tory government have made another error of judgment. If you’re familiar with the case Mr Assange is hold up in the Embassy of Ecuador, and today he was granted asylum.

Regardless of the rights or wrongs of the case the Foreign Office made an almighty blunder in threatening to "storm the Ecuador Embassy" ..in writing no less. They have created a situation which neither country can stepdown from, and if British Police are made to go into the Embassy and arrest Julian Assange, surely this will give other countries a green light to storm into British Embassies all over the world.

I don't know who advises this bunch of morons ...but talk about shooting yourself in both feet in one day to show the world how truly mentally challenged our current Government is, when trying to make a sensible choice and keep the global goodwill generated by the Olympic Games.  I turned to Chris an he said in a plumy voice "I could have sworn it was the Glorious 12th!"