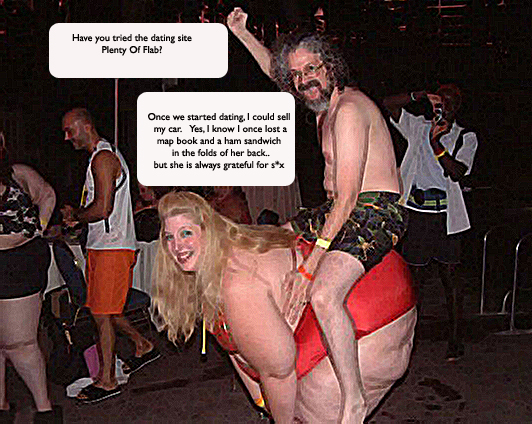 Finding un-fat women in the UK is becoming harder.

It seems this country is drowning in wobbly arms, double chins and spandex jogging bottoms stretched to bursting point.

I’ve often resisted the urge to get my phone out and make a video clip of the rearview then go show her…though the temptation is growing.

their unhealthy weight and banshee-like appearance.  The denial is plain to see in their dating profiles…..

“Where have all the good men gone?”   And my answer would be ….“We are hiding behind the sofa”.

Someone needs to point out that the definition of the word voluptuous is provocative and sexually alluring….not whale like and covered in tattoos, with a scary pose and a large drink in your chubby hand.

Clearly quite a few of these unloved mommas allow their bile and anger to boil into their profiles at dating sites, as they explain in no uncertain terms that don’t want a loser, a liar,married men, a layabout, a drunk, a women hater, an insensitive man, a letch, a man with tattoos, a man without tattoos, a player or a man who is insensitive to the feelings of size 16 lady.

Exposing the modern conundrum of biological urge versus the modern sport of knocking men as followed often in the media.

The Truth Shall Set You Free!

To say that all men are bad are plain wrong and simply not true and yet some of these scary behemoths are convinced that women have no faults.

Where in truth men just want peace and quiet and rarely nag a woman about her bad habits or faults, this over time has helped grow the myth that women are perfect and somehow have to endure the endless faults of men.

This fat disease that was previously the domain of the over the forties and Americans... now reared its ugly wobble in young women who should be in their prime.

When I was 20, I didn’t have the money to get shitfaced every night and yet these day’s young people believe they didn’t have a good time if they didn’t end up fall down drunk. As for chocolate, my childhood favourite Cadbury’s in recent years have departed from their Quaker roots to sell chocolate in ever increasing larger blocks.   So now you can buy the small 65p bar or the super block which could feed a starving family for a week!

Also going unnoticed is the fact that Cadbury’s have changed the recipe of their revered Daily Milk lowering the cocoa fat content down to 23%.

This was done before the Americans took over and have perhaps added to global warming because the cocoa fat was replaced by palm oil. Palm oil trees are often grown after slashing and burning natural rain forests.

I guess at my age I would love to date a fit active “filly” in her 30’s but the sad truth is they like chatting to me because I remind them of their dad and they feel safe.  So I guess I have to lower my sights and get more realistic but I’m not ready just yet to get crushed in bed.  The funny thing is…. after writing politely on my own profile that I’m seeking reasonably fit and attractive women…those words seem to be a magnet for the overweight.  I wonder whether there is a connection between gaining weight and deteriorating eyesight?

I also wonder whether there is any scientific connection between angry fat woman and palm oil?   As for my non-existent sex life, I read somewhere that eating chocolate can give a person the same euphoria that sex can…. So ladies stop having so much sex with chocolate bars and get down the flipping gym!!