Home Archives Profile Subscribe
Are you a 38 degreer?
Dating Site Pitfalls of an Older Man

Greece Is The Word! 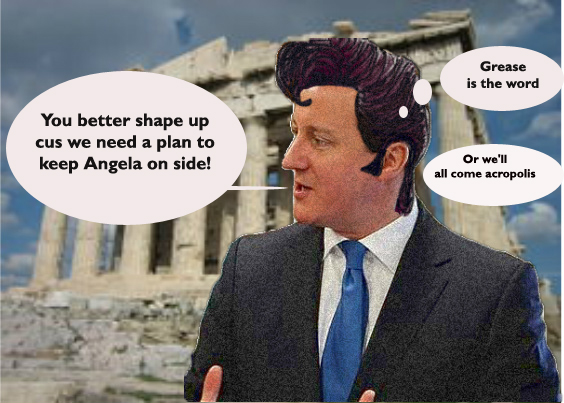 It seems like every politician these days wants to give Greece advice on how to run their government, David Cameron being the latest to stick his oar in.

If only politicians had been so ready to tell banks how to run their businesses 5-6 years ago, or the EU hadn't allowed countries such as Greece to fudge their financial figures to join the Euro in the first place.

Besides the irresponsible bankers, the gamblers on the world's stock markets have much to answer for as well.   No one blames the stock market for driving the world economy even faster down the plug hole, often with speculation on such things as oil and corn (driving up the prices further) which produces nothing except misery for the masses.

The economy in my town

Took a further bashing, not because another shop on the high street closed….

But because a budding internet entrepreneur had £11,000 of his products nicked from his apartment.   The local newspaper reported that 4 suitcases containing sex toys had been stolen,

and then went on to describe the suitcases in some detail!

The campaign to save Kidderminster library Gallery is a coming together of the community in Kidderminster and Wyre Forest to defend the ONLY custom built Gallery and performance space we have got in the district.

The Gallery space was created in 1996 with funding from an Arts Council/National Lottery grant of £326,583. It combines an art gallery with a proper acoustically engineered performance space and the necessary humidity and temperature controls for the grand piano housed there.

Worcestershire County Council want to throw all of this away so they can turn it into offices and cram 139 social care staff in there. This decision was made back in the middle of 2011 but they never intended to properly consult with anyone over it. This is clear from their own documents, their ‘under the radar’ planning application, and the lack of meaningful engagement with either the public or their own staff. It is only after complaints from the public, communities, and unions that they made any attempt to consult, but based it on an exercise designed to give the illusion of ‘consultation’.

If the Gallery is lost, it can never be replaced. These may be tough economic times but there are other alternatives available to the council and we believe this cynical move is being made by a council who appear to be dominated by those who know the cost of everything, but the value of nothing.

Stephen Brown from the Green party said, "This is an accounting sleight of hand to justify cultural vandalism.   In effect, they are making the library service pay for a cut in the social services budget and trashing the ONLY purpose built PUBLIC arts/performance/exhibition space in Wyre Forest at the same time."

One night, Pinocchio's girlfriend says to him,

"This stinks, every time we make love I get splinters."

So Pinocchio goes to Gepetto to ask his advice.

Gepetto says, "Sandpaper, my boy, that's all you need."

A few days later Gepetto runs into Pinocchio and says,

"So how are you doing with the girls now?"

Did we lose the cold war instead of win it?

Did large western companies ever worry about destroying Europe’s manufacturing base by out-sourcing to China?

Therefore we can’t easily create manufacturing jobs in the UK to help rebuild our economy, one that relies too heavily on the financial and service sectors.

If out-sourcing was such a great idea to save money, how come these companies didn’t outsource some of the directors of the company?   So we put up with second rate goods at cheaper prices.

Far too often buying clothes, electrical goods and many other items is a minefield of reading the fine print, a battle of wills for satisfaction and a deep rooted sense that the vast majority of companies no longer care about it’s customers being happy only about pleasing the shareholders and getting fat unwarranted bonuses.