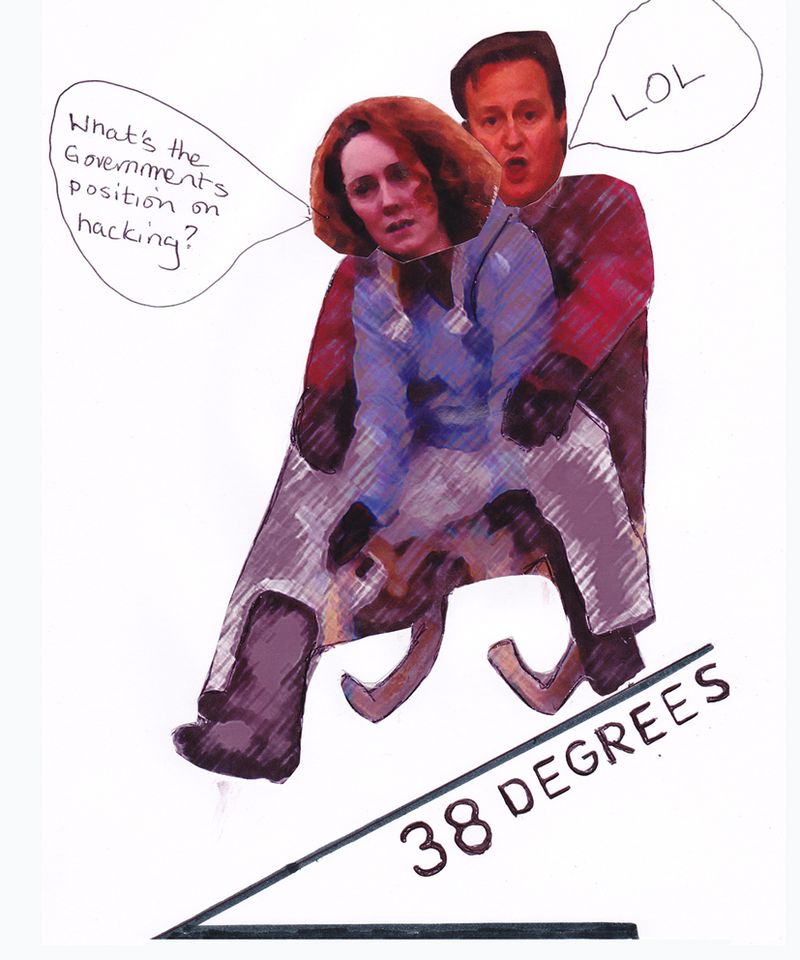 In recent months….no probably a year I have signed every petition 38 degrees have asked me to.

But the question I would like to ask all local and national politicians is why there is a need for a group like 38 degrees?   Could it be that the public in general feel disconnected with our leaders?

Last week in my home town the district council election had a despairingly low turnout of 28.9 percent.  Why is it politicians listen more to their spin doctors than they do to the voters?

As the Leveson (Hacking) inquiry runs into its 7th month do you get the feeling that politicians and the press will be less corrupt at the end of all this?

I for one believe we need to do a lot more to teach children at school their civic responsibilities, particularly the children on the fringes of society.  Only when the voter turnout is back up to 70% plus will the politicians really start paying us more than lip service.  So definately in the short term pressure groups like 38 are very very necessary and applauded.

Can New Political Parties Rise From These Ashes?

We have already seen the green shoots of other political parties, the question is can they grow enough at the grass roots to organise themselves nationally?

I reckon my home town of Stourport is prime example of why the electorate feel robbed of democracy.  On the one hand our Tory dominated local district council Wyre Forest has often done things against the wishes of the people and mostly got away with it.

On May the 3rd the balance of power may have shifted if only the other parties (Independent Liberals, Labour and Independent Community and Health Concern) can work together to break up the cartel.  That said the Labour party have a lot to answer for when their government changed the structure of district councils creating a cabinet (which in reality is more like a cabal).

In recent times the local politicians have tried to close Stourport’s Sports and Leisure centre and relocate it out of town (which is both very un-green and stripping the town of much needed facilities. And for this be going on during a Olympic year and when other politicians are preaching on TV about the value of a town hanging on to it's facilities beggers belief.  Thankfully, due the protest a "stay of execution" has been granted.

On another issue local politicians have ignored laws and fenced in common land on Hartlebury Common, which I'm told has a very unique eco system.... being only one of the two inland beaches in the UK.

A local member of the Green Party Steve Brown is taking on the Government over the laws that have been ignored, but so far he is battling our just cause almost on his own.

On yet another issue the district council have allowed Tesco’s to begin building an unneeded supermarket on the already congested one way ring road, even though there is already a large 24 hours Tesco just 3 miles away in Kidderminster.   This store when open with further decimate the high street and lead to even more empty shops.

They also made a compulsory purchase of the only Garage in town because they wanted to redevelop part of the canal basin, so far the site now stands empty has stood empty for a year.

Even when the funds are found to redevelop the site we don’t need more shops given how many that are currently vacant on the high street.  Now the town’s people have to drive out of town to get their cars repaired.

In a time of budget austerity the Tories also choose to close our local civic center and relocate the district and town council offices out of town.  Refurbishment of the existing civic centre would have cost £5 million but building the new one is costing £10 million.  To me these things just don’t add up and go against common sense and at the very least smacks of favouritism towards certain building companies.

Someone should remind all local and national politicians that serving your country or community is an honour not a gravy train?

Of course there is always the press, if it works

Circulation of newspapers continue to fall, in main because we get our news from many different sources, but for years this has been aided and abetted by the press lowering of standards.

Filling our newspapers with gossip and sex scandals, instead of real news.

Trying get the local newspaper to champion the wishes of the locals against the politicians is of course a none starter…that would be too much like serving the community.  Instead it serves the narrow interests of its Conservative parent company even though its mission statement says

““Newsquest's objective is to have market-leading brands disseminating local information in a number of different and simultaneous ways, which reflect the views and aspirations of the communities they serve. Our multi-media brands must be the authoritative source of information that customers can trust; being willing to listen but not afraid to question.

Here is a thought!!! Place the elderly in prisons. They will get a shower a day, video surveillance in case of problems, three meals a day, not have to worry about paying their heating bills, access to a library, computer, TV, gym ... Put criminals in nursing homes. They have cold meals lights off at 8 o'clock, one bath a week, live in a smaller room and pay 4,000 a month!    It's pretty sad that we treat prisoners better than the elderly!!!!

U-turn Dave is at it again!  After saying the current government was going to scrap the planes planned for the UK’s 2 new Aircraft Carriers… he has changed his mind.  It seems that redesigning the ships so they could have American style catapult system is more expensive than just sticking with the Vertical take off planes planned by the previous government.   For good measure a lot of extra money was spent to figure this out

The Doctor Who Party

I know it sounds wacky because it is supposed to……

It is rumoured that the Independent Community and Health Concern Party, which was founded

by former Independent MP Dr Richard Taylor (to save Kidderminster Hospital from closure), has thoughts about becoming a new national political party. I’ve read that they are thinking putting up many doctors as candidates to reverse the much hated chances to the NHS.

I have met one local ICHC politician who just got elected to the district council.  He seemed like a very decent and reasonable man and I found during our chat we held very similar views on a lot of local issues.  I wish him all the best in bringing back common sense into the district council, but I do wish his party would think of a less lengthy name than the Independent Community and Health Concern party…so perhaps The Doctor Who Party might be a winner?

Guess what the BBC reported on the 14th May