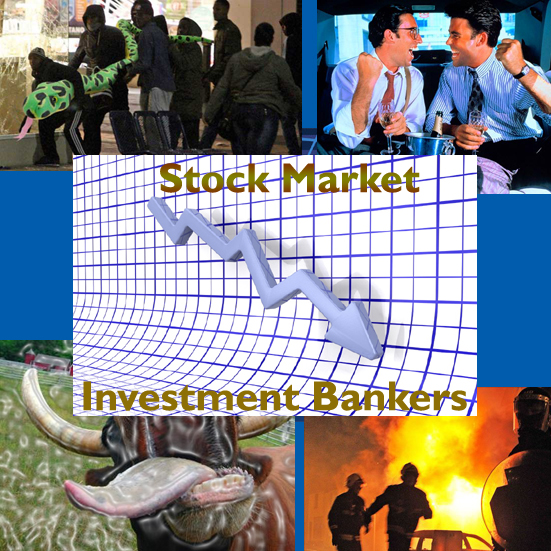 No, I’m not talking about the mindless gangs of young people smashing and looting English cities, although they do indeed need tackling and given prison sentences instead of a being fined and told off.

I’m in fact talking about the other end of our social spectrum.

The so-called investment bankers; who more than anyone else gambled most of the Western World into debt, which we are still dealing with 3 years on.   No one person or institution has been held to account and made to pay for their criminality.  Why is it that because their stealing and thievery was on a much larger scale, their sins go unpunished?

In the 21st century, surely there must be more done to hold those at the top of society to account if we want to lecture those at the bottom about honesty, decency and fairness.  The miss-selling of insurance on loans by UK banks, for which no bank executive has been held to account for sanctioning or allowing these criminal acts.  Yes, the banks are now being forced to pay the money back but no one is going to jail or losing their job, or their bonuses for such immoral behaviour.  It's just accepted...oh well there are bankers after all.

In my lifetime there have been numerous national scandals, like Mad Cow disease, where dishonest and immoral behaviour (to save money and increase profit) saw cows (who are naturally vegetarian) fed meat by-products from diseased sheep.  And yet I never saw any individual or company prosecuted for causing this.

It seems the rule of thumb… if the scandal is big enough and the prosecution of high-end wrongdoers will bring politicians and leaders into disrepute, then heaven and earth are moved to prevent this.  Look how much David Cameron and his government tried to protect Rupert Murdoch until the dam broke?

Currently, all around the western world, stock market bond investors and speculators are causing havoc, increasing the bad debt situation by driving down share prices…just to make a killing.    I’m all for a capitalist system but one that still has a moral compass.

I believe speculating on the price of oil, corn and other futures are morally wrong.  It manufactures nothing but misery for ordinary working people.   Every aspect of our lives is dominated by the unreasonable greed of others….the power companies….the price of petrol and so on and on.  When is enough enough?

The divide between the rich and the poor grows ever wider because rich thieves have powerful friends.  In the words of an old rude British rugby song,  “ain't it all a crying shame, it’s the rich what get the pleasure and the poor that takes the blame.”