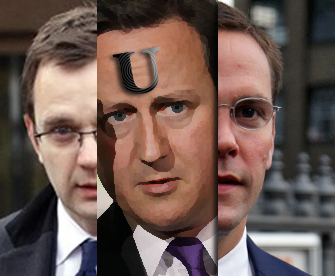 If times were not so serious a lot of the current government shenanigans would be laughable. A comedy scriptwriter couldn’t make it up.   Let’s first skip past the pre-election promises they did U-turns on because let us face it politicians would promise you a night of passion with their mum if it got them elected.

David Cameron showed great reluctance for an inquiry into the hacking scandal and also resistance to calls to put the Murdoch purchase of BSkyB on hold.   But thankfully U-Turn Dave as I like to affectionately call him realised much later than the rest of us, that no action was not an option.

Eye of the storm

So here we are several weeks later as this story moves faster than I can type, more questions have been thrown up as each tornado hits. Like a twister tossing over everything in its wake, and a look of shock and surprise as each “important” person is spit out of its mouth, trying to stay composed as the rest of us laugh.   I definitely think born again Christians should seek an early meeting with Rupert and offer him sackcloth and ashes as suitable attire for his upcoming hearings.

The Governments-end of year school report

Having just read the glowing school report of my young daughter, I wonder what kind of an assessment the current government would get? On issue after issue David Cameron and his ministers have made some breathtaking mistakes squarely choosing to be on the wrong side of many important issues again and again.

The thread that runs through all of these important decisions is their lack of morality, honesty and frankly common sense.   But worse than all of this is their arrogance….. born not out of incredible talent but out of their elitist roots that convince them they know better than the rest of us.

Important decisions including trying to sell off our ancient forests (as if the Tories or any government had the right to do so).

Then, of course, it’s the NHS and trying to reform it (albeit privatise it through the backdoor) without listening to the doctors and nurses who work in it.

Then there's the recent Bombardier train fiasco where a contract to build new trains was awarded to Siemens (a German company) and the net result will be thousands of jobs lost in and around Derby from Bombardier and its suppliers. The German government would never award a contract to a British Company at the cost of German jobs, nor would I expect them to.

Of course, let us not forget our Aircraft Carrier capabilities, the Tories have in store for us which will see us have a Carrier but no aircraft to put on it (at least for a while). Suggesting the French might somehow cooperate and provide stop gap plans for the Carrier…since when have the French (God bless them) ever put their aircraft in harm's way for Britain?

Where the buck stops?

We know now that Mr Cameron was advised by Vince Cable and Nick Clegg not to hire Andy Colson, and sooner or later just like the other bigwigs the Prime Minister will  have to answer fully for his actions.    Why couldn’t he see that hiring News Of The World Andy was a bad move for his press secretary, after all, Andy had been forced to resign from a sleazy rag, what kind of a recommendation is that, and what does that say about Mr Cameron's judgement?

Some people say that that U-Turn Dave modelled himself on Tony Blair, which if true shows the biggest lack of judgement of all.    A union friend of mine once told me he had met Tony Blair a few times before Blair became Prime Minister…. so I asked him what is he like and my friend answered “A Used Car Salesman”.

In my lifetime one can often accuse the Labour party and some of its governments of incompetence. But on the other hand unfortunately since the rise of Maggie Thatcher the Conservatives are often connected to making laws or deals that benefit their chums… Selling off many of the nationalised industries for a song, including the railways which we the taxpayer still subsidise to the tune of billions and our railways are still a bad joke.. just more expensive.

Indeed it was because of Margaret Thatcher’s changes in the law that Rupert Murdoch was able to take control of so much of Britain’s media, talk about Déjà vu.