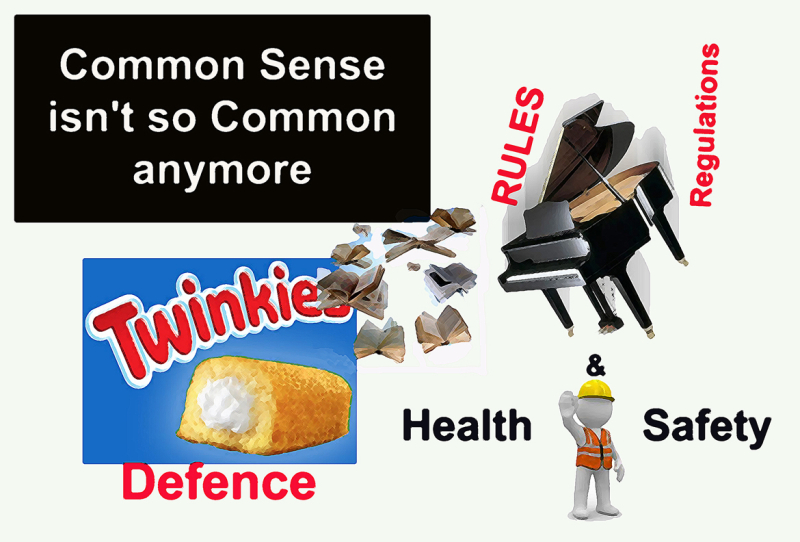 Historically we call it Common sense…it’s the thing that we all are supposed to possess. We used to use it to decide on the proper course of action, in a given situation. In the past, it helped frame our common laws and morals.

Ancient man developed common sense to instinctively warn him of the dangers in his world. As mankind developed further common sense spread into other areas of our lives, for ourselves and our families. Common sense taught us how to stay dry, warm, fed, alive.

Therefore to me the importance of “Common Sense” is paramount, without it as a species we would not have developed as far as we have.

Somewhere in the late 70’s during the “me generation” the development of our species hit a brick wall…..you think I jest…but no..I am earnestly serious.
Along with the beginning of the “me crowd” came the lowering of responsibility in our world. Suddenly clever lawyers were duping juries into not guilty verdicts due to a rush of blood, a moment of madness, the twinkie defence,diminished responsibilities seemed to get broader and broader. People who have done terrible things have gotten away with it if they have a lot of money or a great lawyer.

Yet I see very little defence by us………of common sense, we ring our hands and bemoan the lack of common sense in today’s world but we moan and grumble amongst ourselves, not to our leaders (in business and politics).

This shrinking of common sense has seemingly left a vacuum which has been filled with an avalanche of rules and regulations; trying to make good the short fall of common sense. But we all know in truth this does not properly replace common sense. These often absurd rules just frustrate the majority of the people and yet rarely stop or curtail the behaviour of the unruly few.

But in some small way we are all to blame and have neglected our moral and social responsibilities. We can't complain about the lack common sense if we are unwilling to speak out when it is absent.

When I was a school child misbehaving on a bus some adult would be sure to correct my behaviour either verbally or even perhaps more forcefully by grabbing me and giving me a good telling off.
Today..doing such a thing would get the said adult arrested on all manner of charges and probably they would also run the gauntlet of the local/national media. Now don’t try and tell me we are a better, more caring, more civilised society now than 40 years ago.

If we truly want the world to be a better place we all have our parts to play, to stand up for what is right…and we all know right from wrong,
After all…..common sense tells us so.

© 2006. All rights reserved. No content on this website including, but not limited to, text and photography may not be reproduced without prior explicit written consent.